WordPress database error: [You have an error in your SQL syntax; check the manual that corresponds to your MySQL server version for the right syntax to use near 'ON DUPLICATE KEY UPDATE original=VALUES(original),translated=VALUES(translated),' at line 1]
INSERT INTO `dagobert_trp_gettext_en_gb` ( id,original,translated,domain,status ) VALUES ON DUPLICATE KEY UPDATE original=VALUES(original),translated=VALUES(translated),domain=VALUES(domain),status=VALUES(status)

The legend of coffee.

It all started in the year 850 AD, in Yemen, where a shepherd named Kaldi, noticed that, after eating small red berries from a local shrub, his goats were lively and frolicking about like never before. Astonished to see them like this, he told the prior at the neighbouring convent about the phenomenon. The prior immediately prepared an infusion of the berries and had it tasted by his monks. He also noted that, after drinking the infusion, the monks stayed awake for most of the following night!
One rainy day, a monk from the convent brought a branch laden with berries close to the fire to dry them, and then forgot all about them. The berries began to char, giving off a pleasant odour ...
So, the monk crushed the charred berries before preparing the infusion as usual. Surprise, surprise! ... the beverage obtained was better than ever before. Roasted coffee was born.

El cafeto es un arbusto tropical de la familia de los Rubiáceos y del género Coffea. Existen unas 60 especies diferentes en estado silvestre pero sólo dos de ellas se comercializan.
Coffee bushes The coffee bush is a tropical shrub of the Rubiaceae family and the Coffea genus. In nature, there are 60 different varieties, but only two are commercialized. The Arabica variety� Coffea arabica This variety represents 75% of the world’s production and grows at altitudes of between 400 and 2,000 metres. It makes mild, fragrant, fruity and acidulous coffees. Its caffeine content is between 1 and 1.7%. It is grown in Central and South America, East Africa, Asia, and Oceania. The Robusta variety� Coffea canephora This variety grows on plains up to 800 metres in altitude. It makes strong but not very aromatic coffees. Caffeine content is from 2 to 4% on average. Its lower price is justified by its strong resistance to bad weather and disease as well as by its high productivity levels. Robusta is grown in Africa, Indonesia, Asia, India, and Brazil.

It takes 3 years for the bush to flower for the first time and 5 years for the first cherries to be harvested.
A coffee bush produces about 2.5 kilograms of cherries per harvest or about 500 grams of green coffee. This makes about 400 grams of roasted coffee which represents about 50 cups. The fruit on the branch may ripen at different times of the year. A coffee bush lives up to the age of 25 to 30 years. Coffee plantations are grown in the shade of larger trees to protect them from the sun. Bushes are cut down to a height of about three metres to facilitate pruning and harvesting.

There are different methods of picking.
Stripping: Everything is picked up at the same time. A flexible comb is passed over the branch for making the ripe cherries fall off. Mechanical: the operation can also be done by shaking the tree for making the cherries fall off.
Picking: This consists of regularly visiting the plantation and only picking ripe fruit. Up to eight visits may be required.

The first way is called the “wet method” which consists of taking the ripe cherries, removing the pulp, making them ferment and then washing the beans. The beans are then dried for obtaining green parchment coffee. The second way is the “dry method” which consists of drying the cherries in the sun and then removing their husks for obtaining the green coffee beans. The beans are then sorted in terms of quality and size for selecting them before sale.

This is the stage where a green coffee bean is transformed into a roasted coffee bean. It is the roasting operation that gives the coffee its odour, taste, and colour and which develops its aromas.
Different methods can be used depending on the size of the roasting unit.
The traditional artisanal way This is done with the help of a drum roaster in which loads of 5 to 120 kg of green coffee are incinerated. The coffee is agitated at temperatures between 180 and 240°C. Heating is done by fuel, gas or wood. Roasting lasts between 15 and 22 minutes.
The rapid or industrial flash method This principle consists of roasting from 1,500 to 4,000 kgs of beans per hour. The coffee is fed into an immense tunnel where hot air between 800 and 2,000°C is blown through on the same principle as a hair-dryer. Roasting lasts between 90 seconds and 4 minutes.

Enjoy your cup while remembering all the stages needed for enjoying a really good coffee. A large number of people have worked and taken care of your coffee at every step in its transformation, from flowering to roasting. Good coffee is the result of the work done by a fraternity of people with a passion for coffee, who all come from many different countries and cultures. Tasting a good cup of coffee is always the result of a shared, convivial moment of tolerance. 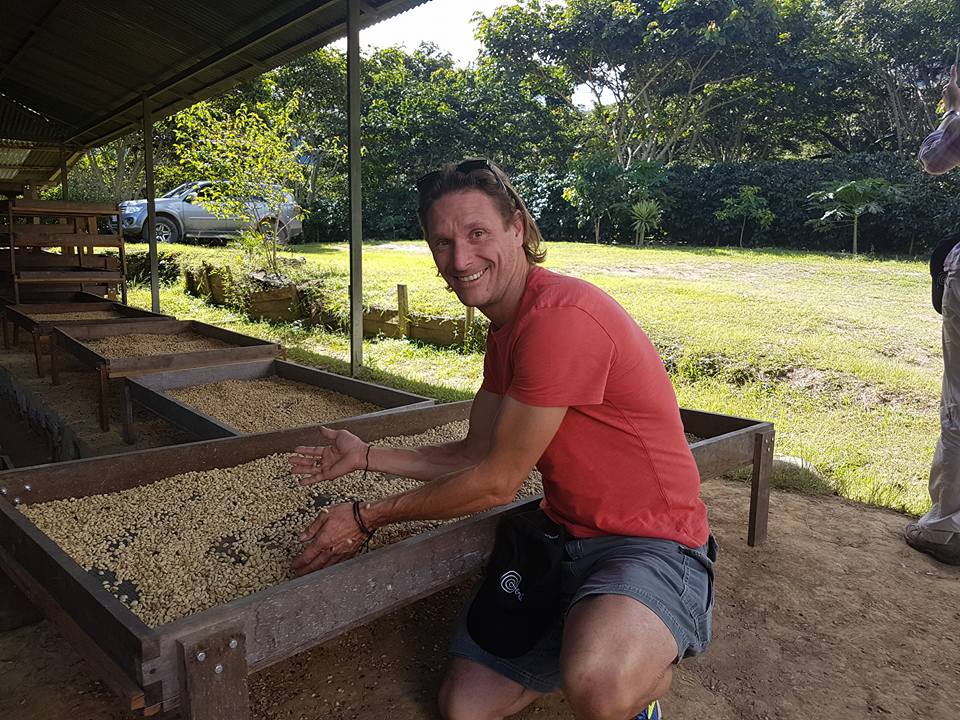 This message is only visible to admins.
Problem displaying Facebook posts. Backup cache in use.
Click to show error

Error: Error validating access token: The session has been invalidated because the user changed their password or Facebook has changed the session for security reasons. Type: OAuthException